If you haven’t gone looking for news about international recycling, you may not realize the significance of a recent development out of China. The country’s “National Sword” policy—sometimes shortened to “China Sword”—isn’t new, but the restrictions it places on foreign waste imports became even stricter at the beginning of this year. American recyclers and consumers alike are already experiencing the effects. 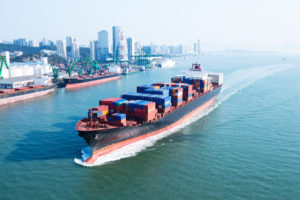 To refresh your memory, China introduced the National Sword policy in 2017 (which we’ve written
about additionally here, here and here). The intention was to crack down on smuggling of illegal goods and to improve environmental conditions within China by adopting higher standards for what the country would import.

Before the policy was implemented, China would import huge quantities of waste from other countries, including the U.S. The country had fairly low standards for what it would accept, so recyclable waste would often be mixed with trash and contaminated items such as plastic containers with food debris. China’s processing facilities would then have to manage all that unusable waste.

For other countries, China represented a convenient dumping ground for mixed waste. For China, accepting the world’s castoffs became too big a burden. Through the National Sword policy, China announced much stricter standards for imports. The policy specifically identified 24 categories of waste that China would no longer accept once the policy took effect in 2018.

Though we’re several years past the introduction of the National Sword, China has continued to expand its restrictions. The country’s government hasn’t been forthcoming about what would happen down the road, so industry insiders have spent the last few years speculating about whether China would eventually ban all imports of waste from other countries. In late 2020, the Chinese Ministry of Ecology and Environment confirmed that a total ban on imported waste would go into effect in 2021. This means that—as of January 1, 2021—China no longer buys any solid waste imports from the United States or anywhere else.

(It’s important to distinguish here between waste and scrap imports. While China will no longer buy other countries’ waste, its government has clarified that scrap metal is not considered waste. Certain kinds of metal will still be accepted at China’s ports, though we’re still expecting further guidance about the future of scrap metal imports in China.)

One significant consequence of the new blanket waste ban involves fiber. Recycled paper is broken down into fibers, which can then be used to make new paper. Having access to recovered fiber is essential for many businesses that create recycled paper products, including many Chinese manufacturers. China is one of the top paper-producing countries in the world and historically relied on imported fiber to supplement its domestically-produced fiber. (One 2018 report said that 67 percent of the material China used to make paper products was recycled, with 41 percent of that fiber coming from imports.)

Fiber imports have been slowing down in the last few years because of restrictions imposed by the China Sword policy. The new blanket import ban means that within China there’s now more demand than ever for recycled fiber. Other Southeast Asian nations have stepped up to attempt to fill the gap that the National Sword created. Countries including India and Vietnam have started importing more mixed paper and cardboard since the National Sword began. Other Asian nations including Malaysia and Laos have also been building more facilities to turn recovered paper into fiber and pulp.

Interestingly, China doesn’t classify pulp as waste. Pulp is basically recycled fiber that has already been processed, stripped of ink and cleaned with water. Countries including the U.S. do currently have the ability to sell recycled pulp to China, though this process involves plenty of logistical challenges.

Ultimately, the National Sword policy and its 2021 expansion means we’re seeing a big shift in how American companies export their paper waste. Some entities will certainly struggle this year to find a market for recovered fiber now that China won’t buy it, and consumers may see prices rise for paper products because recycled fiber is harder to come by. It will be interesting to see the long-term effects that China Sword has on paper recycling in the coming years.

I know that developments around recycling may not be top of mind for you, but they are for me and for everyone here at Miller Recycling. We’ll keep you updated with everything your business needs to know about China Sword and cost-efficient recycling. If you have questions about dealing with mixed paper, or any other recycling concerns, contact me today.