Low density polyethylene is all around us, though people who don’t work in the recycling or plastics industry might not realize that. This type of plastic, also called LDPE, is used in the creation of dozens of common products. But while LDPE is very widely used, it’s not widely recycled – and that’s an issue that affects all of us. How does your business dispose of LDPE? If you’re not sure, it could be time to make some changes. 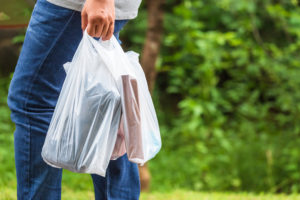 To the average consumer, low density polyethylene is more commonly known as plastic type #4. It’s used to make plastic shopping bags like those provided by grocery stores and other retailers. LDPE can also be used to make plastic bread bags, food wrappings, squeezable bottles and tops for plastic containers such as margarine tubs. Cereal bags, garbage bags and plastic sandwich bags are other examples of products that are commonly made from LDPE.

Recycled LDPE can be used to create a wide range of products, from garbage cans to manufactured lumber. Used grocery bags may also be turned into new bags.

LDPE is similar to HDPE (high density polyethylene), or plastic #2. HDPE is a thicker and more durable cousin of LDPE and is used to make some types of plastic bags and many types of plastic containers. However, HDPE is more commonly accepted by recyclers than LDPE.

The Problems with LDPE Recycling

Technically, LDPE can be recycled. Just because something can be recycled doesn’t mean it will be recycled, though. Plastic bags, like grocery bags made from LDPE, have a tendency to tangle in recycling machinery. It becomes necessary for workers to routinely stop the machines and remove all the plastic before continuing. That eats up employee time and may cause damage to equipment. Ultimately, LDPE recycling isn’t financially worthwhile under those conditions.

Those complications are precisely why many municipalities won’t accept #4 plastic in curbside recycling bins. Grocery stores and other businesses that provide LDPE bags sometimes set up collection bins where customers can return used bags with the understanding that the stores will ensure they’re properly recycled. Also, some products made with LDPE are used and reused until they reach the end of their usefulness, like when consumers save grocery bags to use as trash-can liners.

Still, the overwhelming majority of products made from LDPE end up in landfills. Data from the Environmental Protection Agency confirms this. In 2015 – the most recent year for which the EPA has released data – just 6.2% of LDPE generated that year was recycled. By comparison, plastics type #1 and #2 (PET and HDPE) had recycling rates of 18.4% and 10.3%, respectively.

Dumping tons of LDPE in landfills can have devastating consequences. For one thing, plastic buried in landfills can leach into the soil and introduce chemicals into the groundwater. In coastal areas, plastic in landfills also poses a threat to marine life. Lightweight plastic bags can be blown great distances by the wind, ending up in bodies of water where animals eat them or become tangled in them. (According to a 2018 study, 52% of the world’s sea turtles had ingested plastic, which is fatal for many of these and other sea animals.)

The Future of LDPE

The growing support for plastic bag bans may have some effect on LDPE production and disposal in the coming years. As of 2019, eight states have banned the use of single-use plastic bags like those distributed by grocery stores. Several major cities including Chicago and Washington, D.C. have also passed laws either banning plastic bags or requiring retailers to charge customers who use them. New York’s statewide law goes into effect in March, 2020.

Necessity often breeds innovation, and alternatives to LDPE are coming onto the scene. For example, this biodegradable plastic substitute dissolves in water in minutes and is so safe you can drink the water solution afterwards. The good news for plastic manufacturers is that this particular alternative can be manufactured on the machinery currently used to produce plastic bags with minimal alterations.

No matter how successful efforts to minimize single-use LDPE products are, it may still play a critically important role in how you run your business. Manufacturers will continue to need to use stretch film to secure loads and protect shipments from from getting wet, for example. But if your business disposes of plastic wrap, plastic bags or other LDPE products by treating them as trash, you could be unintentionally contributing to health and safety risks in your community.

The LDPE waste that your business generates will outlast you by centuries. Your municipal recycling program probably won’t help you convert that. Miller Recycling not only accepts LDPE for processing, but pays competitive prices for recyclable plastics. Trusting us with your LDPE waste keeps it out of landfills and benefits your bottom line.

How can Miller Recycling help you with your LDPE recycling needs? Contact us today to learn more.