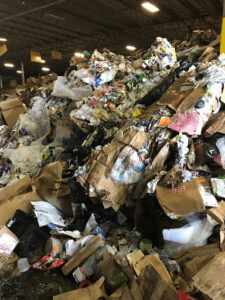 People watching TV in 1990 might remember seeing commercials from DuPont declaring that empty plastic containers weren’t trash—they were “full of potential,” and that potential could only be harnessed by people recycling plastic. That same year, Coca-Cola began making bottles using recycled plastic. By 1992, there were nearly 5,000 curbside recycling programs in the U.S. (many of which accepted plastic), up from just 1,000 in 1988. And by the end of the ‘90s, recycled plastic products were everywhere.

Americans got the message: Plastic could—and should—be recycled. Helping the planet was as easy as dropping an empty plastic container in the right bin! What they didn’t know at the time was that most of the plastic that went into those recycling containers ended up in landfills.

Today, more recycling education means that consumers are more aware of the challenges around plastic recycling. As a result, there’s a lot of confusion about the benefits and value of recycling plastic. It’s true that a lot of discarded plastic will never be reused—but some of it may be, and recycling plastic can still be worth the effort.

In 2018—the most recent year for which the EPA has recycling data—American landfills received 27 million tons of plastic, accounting for nearly one-fifth of all landfilled waste. By comparison, just three million tons of plastic were recycled into new products that year. Plastic had an overall recycling rate of just 8.7 percent. By comparison, 68.2 percent of paper and paperboard were recycled that year.

As with metal recycling or paper recycling, recycling plastic minimizes the demand for virgin materials. Creating products using recycled plastic requires less oil and gas than creating new plastic does. But while recycling plastic has environmental benefits, there’s no denying that it’s more complicated to recycle than recycling metal or paper.

For one, sorting and cleaning the many different types of plastic is difficult even using automated equipment. Plastic is often tainted with food debris or other contaminants that make it unusable. Items may be made of plastic and other materials, or out of multiple types of plastic, further complicating the sorting process. Plus, plastic isn’t infinitely recyclable the way metal is. It degrades every time it’s processed, so a piece of new plastic may only be recycled once or twice before it’s unusable.

It has also gotten much harder for American recyclers to find a market for used plastic since China launched its National Sword policy and stopped accepting most imported waste. China’s decision to stop buying recovered plastic is driving more of it into American landfills.

Even though recyclers struggle to manage recovered plastic, we know that consumers are still largely willing to recycle it. Hi-Cone, an Illinois-based beverage packaging supplier, recently released its second annual report on The State of Plastic Recycling. The 2021 report surveyed 5,000 adults across the U.S., Mexico, Spain and the U.K. about their attitudes and behaviors around recycling plastic.

Clearly, many people are accustomed to recycling plastic—and that doesn’t need to change! There’s still demand from manufacturers that rely on recovered plastic to make new plastic containers, bags, clothing and other items. Nike uses recycled plastic bottles that are shredded and turned into yarn to make recycled polyester for its shoes, diverting 1 billion plastic bottles from landfills each year. Technological advancements could also make widespread recycling plastic more viable in the near future; one UK company is currently building the world’s first commercial plant that will recycle all types of plastic. Using a hydrothermal technique, the company says it can recycle even contaminated plastic—and that the process won’t cause any degradation in quality.

The future of plastic recycling is uncertain. For now, what can businesses and individuals do? Several things. First, focus on recovering the most recyclable and valuable types of plastic. While the overall 2018 plastic recycling rate was 8.7 percent, recycling rates were around 29 percent for both type 1 PET plastic (used to make water and soda bottles) and type 2 HDPE plastic (used to make things like milk jugs and detergent bottles).

Also, educate everyone around you about the importance of washing contaminants off of recycled plastic. Post information above recycling containers that clarify what kinds of plastic should go into those containers. This can prevent “wish-cycling,” in which people put things in a recycling bin even though those items probably can’t be recovered and reused. It’s just as important to keep unusable plastic out of recycling containers as it is to properly recycle plastic.

All businesses generate plastic waste, and many don’t have a good system for disposing of it. Let Miller Recycling help assess your business’s needs to create an easy, cost-effective recycling system. What questions do you have about recycling plastic or other materials? Contact me today!